Can Resveratrol Help With Depression & Anxiety? 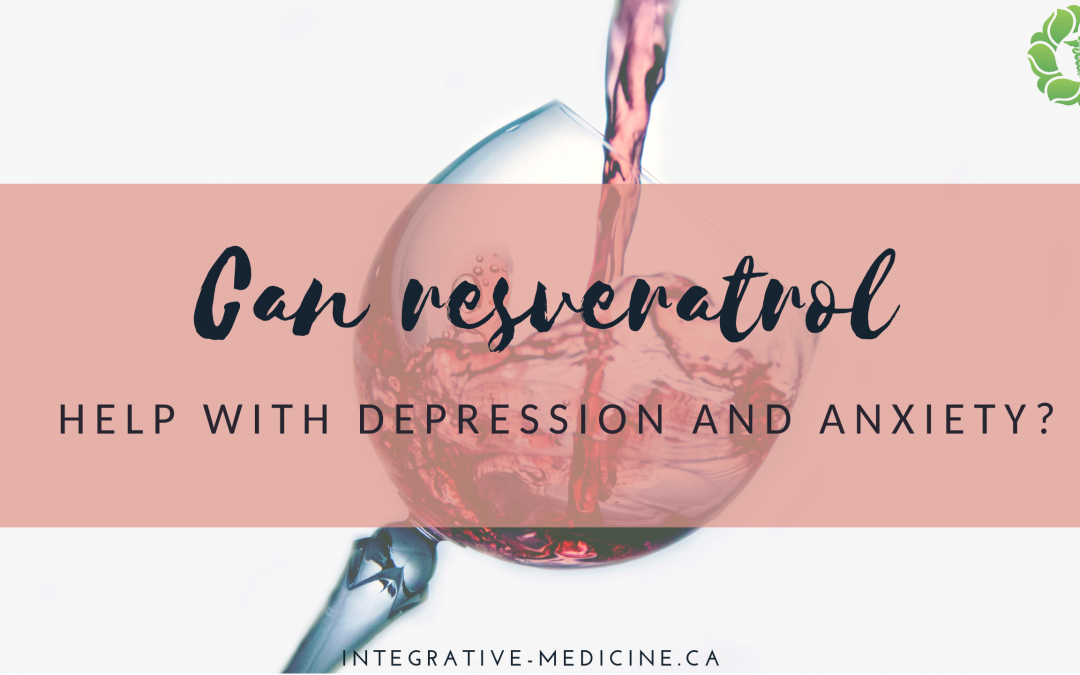 Resveratrol is a phytonutrient (a beneficial substance produced by plants) found in grapes, dark berries, cocoa, and, famously, red wine. The numerous potential health benefits of resveratrol have been studied extensively over the last few decades, and range from heart disease prevention to protection of cognitive function (1).

Resveratrol has powerful antioxidant and anti-inflammatory effects (2). It has been found to protect against and/or slow the progression of cardiovascular disease, diabetes, neurological disorders, and some cancers. Many experts believe that resveratrol can help to extend one’s lifespan, and more importantly, extend one’s time living in good health.

The nutrient first came under the spotlight in the 90s, after scientific research found that resveratrol could prolong the lifespans of various life forms.

Because of the resveratrol content of red wine, many people began to talk about this phytonutrient as being the key to understanding the “French Paradox”– the phenomenon that finds very low rates of heart disease in France, in spite of a diet typically high in saturated fats and wine.

For the record, red grapes alone do contain resveratrol, but red wine contains more– a result of the fermentation process. Resveratrol is also available as a dietary supplement.

Some people believe that resveratrol has been “over-hyped” given what we truly know about its effects on human health (the vast majority of studies have been done on animals). After all, health benefits of red wine do make for catchy headlines. But in spite of its limitations, the research on resveratrol has been compelling, and we are still finding new benefits of it today.

Some of the most interesting new research on resveratrol points to its potential benefits for those who are suffering from depression or anxiety. Here, we explore this new research, and a sampling of what we know so far about resveratrol, the brain, and mental health.

Resveratrol and the brain

Resveratrol is arguably best known for its effects on cardiovascular health and longevity, but it also has powerful effects on cognition.

The potential benefits of resveratrol for cognitive function and brain health include protection against loss of or damage to neurons, and against neurodegenerative diseases like Alzheimer’s and dementia.

Resveratrol increases blood flow to the brain, and helps to fight damaging free radicals. And, while most antioxidants cannot cross the blood brain barrier, resveratrol can.

Interestingly, though, resveratrol’s ability to cross the blood brain barrier may not be as important as we once thought– some research suggests that resveratrol actually protects the brain via the gut-brain axis (3).

Resveratrol for anxiety and depression

If you’re suffering from depression or anxiety, supplementation with resveratrol may be worth looking into.

Antidepressant and anti-anxiety effects of resveratrol have been observed and demonstrated in the past, though not entirely understood. A recent study offers further evidence of the link, and helps to illuminate the potential mechanism behind these effects (4).

Past research has shown that resveratrol may increase the activity of mood-boosting neurotransmitter serotonin in the brain (5) in order to improve symptoms of depression. Enhancing the activity and function of serotonin is the primary way in which most antidepressants have typically worked– however, not everyone with depression responds to medications that work on the serotonin model of depression.

The new study suggests that resveratrol may actually help with depression and anxiety because of its ability to regulate an enzyme in the brain, PDE4, that is linked to stress.

We know that when we’re stressed, our body releases specific hormones– like cortisol– that help our bodies respond to and cope with the crisis. When we are under extreme levels of stress or prolonged low-grade stress, we can end up with excessive amounts of these hormones. This can cause damage within the brain, and lead to depression and anxiety.

Research has shown that excessive amounts of corticosterone (a stress hormone related to cortisol) can increase levels of the enzyme PDE4 in the brain. PDE4 can cause physical changes within the brain, and has been shown to lead to anxiety and depression like behaviours in rodents.

The new study, which was trying to understand whether or not resveratrol could have a positive effect on stress-related damage and how, found that resveratrol decreased levels of PDE4.

This means that the benefits of resveratrol for anxiety and depression may be, at least in part, due to its ability to reverse damaging effects of stress on the brain.

What you need to know about taking resveratrol

Red wine is one of the best dietary sources of resveratrol, but of course, should be consumed only in moderation.

There may be some benefit to drinking a glass or less of red wine per day, but this resveratrol intake is nowhere near equivalent to the doses of resveratrol that are used in clinical trials for chronic disease. To get closer to these doses, supplementation is generally the best option.

Furthermore, the alcohol content of red wine might actually reduce the benefits of resveratrol. For those with a histamine intolerance or autoimmune condition, red wine is not a good idea.

The main concern with resveratrol supplements is that resveratrol has poor bioavailability. In other words, when you take resveratrol, it is broken down very quickly, and it is a relatively small amount that stays in the bloodstream.

As mentioned above, most research on resveratrol has been on animals or cells, and it is not known for sure what impact resveratrol may actually have on human health, especially given its generally poor bioavailability. Some people may respond to, or benefit from, resveratrol differently– as with all supplements and nutrients.

If purchasing resveratrol supplements, make sure to look for “trans-resveratrol” on the label. This is the more active form, and is considered to be more effective than the “cis-resveratrol” form.

There are a few things you can do to increase the bioavailability of resveratrol, including combining it with other polyphenols you may be taking, such as quercetin (make sure to discuss this with your practitioner first), or taking it with a meal high in healthy fats.

Resveratrol as a supplement is generally well tolerated. In large doses, nausea or stomach upset may occur.

Resveratrol supplements should be avoided when taking certain medications, including some blood thinners and NSAID pain relievers. Resveratrol should also not be taken by those with iron deficiency anemia, due to the way it binds to iron. As with any supplement, it is best to discuss with your practitioner before proceeding.