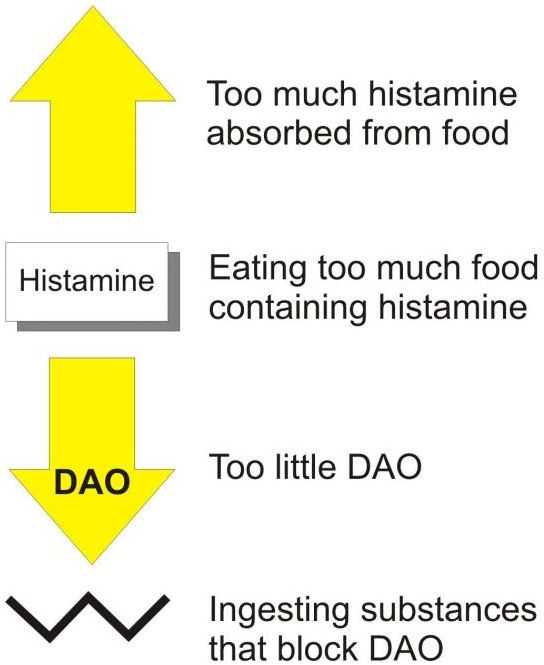 Game-changing. Paradigm-shifting. Revolutionizing.  I am not one for hyperbole or exaggeration. But when I attend conferences, as I do often, and sift through the mounds of information, my service as a health practitioner is to bring to the clinic, on the Monday after, any medical breakthroughs that I think will assist my patient base.

It was like that with probiotics and “leaky gut” in the mid-90’s for me, chelation therapy in the later 90’s, vitamin D 10 years ago, and mitochondrial dysfunction a couple years back.  Each ahead of its time I might suggest, when compared to when mainstream medicine catches on, but foundational and paradigm-shifting in their own regard. To each of these is added more research, more data that supports with better evidence what for me was an earlier “truth”, and a “must have” in my practice.  I have written and lectured about each of them at one time or another, often times repeatedly.

The next game changer you ask? Histamine intolerance will explain a great many of the unresolved health problems I see.  One hopes that, with the correct diet plan, proper nutrient cofactors (Vitamin C, B6) and specific enzyme therapy i.e. DAO or diamine oxidase, many issues of a chronic and, thus far, unanswered nature can be resolved. The amount of suffering related to histamine intolerance, including in children, is quite large I suspect.

To know about intolerance of histamine is to first know about histamine itself. When released from histamine producing cells, histamine causes swelling and inflammation, and a host of symptoms depending on the tissue involved.  Receptors for the released histamine can be found in almost every organ in the body, so the symptoms are widespread, but with inflammation always at the core. In the eyes – itching and tearing. In the nose – sneezing, itch and congestion. The skin – rashes, hives and itch. The uterus – pain and cramping. The heart – racing and palpitations. The stomach – pain, indigestion, heartburn and nausea. The head and brain – headache, mood swings and brain fog. In children, one can see, reflux, vomiting, eczema, headache and/or anxiety. These can sound like symptoms of allergy in many cases, and indeed exposure to pollens and dander cause histamine release.  But, as I’ve come to understand and observe, many patients with the very same symptoms suggestive of allergy can have completely normal allergy tests. What gives? Histamine intolerance, I’d say.

When histamine builds and isn’t broken down by the enzyme DAO, the aforementioned symptoms ensue. Which symptoms occur depend on which receptors are most activated and in which tissue. I react to histamine overload with headache and brain fog, aggravated by heavy physical exertion (which also causes histamine release). DAO activity reduces toward the end of a menstrual cycle, hence the symptoms of PMS that some women can have, and not always related to hormones.  Sun exposure releases histamine, and again with reduced DAO activity headache or rash can occur.

Why is DAO activity reduced in some folks?  There are genetic variations that we all face – inefficient DAO production is one of them. Additionally, DAO requires B6 and Vitamin C for its formation, and some are deficient in these nutrients.  Alcohol is a DAO blocker, so a session of drinking can be a double whammy: histamine exposure and reduced DAO activity. And DAO also requires .. as you may have guessed … a balanced bowel microbiome and avoidance of intestinal lining damage, since it is produced mainly in the lining of the intestine. As I’ve referred to over and over and over again, the most important ecosystem affecting human health most directly and profoundly is the one in our own GI tract. As I’ve also said, we’ve badly messed with it, quite directly and profoundly.

Correcting histamine intolerance may be as simple as avoiding high histamine foods, such as aged cheeses, wine, certain fruits, age meats, and others.  The older the food, the more ripened the fruit, the more fermented the cabbage, the more aged the wine … the more histamine one will consume.

Of potential benefit also is to supplement with DAO before meals. And of course, healing “leaky gut syndrome”, so that DAO productivity can be restored, is also a mainstay, which will require DAO supplementation for a period of time for some patients. We have even more understanding as to why leaky gut protocols have been so helpful to so many.  With histamine intolerance now understood as a potential missing link, I am hoping for even greater clinical successes.

At Markham Integrative Medicine, we will be adding DAO to our dispensary shortly.  We also have available blood testing to measure DAO specifically, and to help monitor its levels during any treatment protocol.  Schedule an appointment for yourself (or your child) to see if symptoms may be explained in part by histamine intolerance, to receive counseling on a low histamine diet plan, and to determine if the adjunctive tests and supplement are right for you (or your child).